Part 2 of a 2-Part Series on the topic of Angels.

Angelic activity in the life of Jesus:

1. After Jesus’ “wilderness temptation” in Matthew 4, we read that “angels came and attended Him.”

2. When Peter pulled his sword to “protect” Jesus in the Garden of Gethsemane, Jesus rebuked Peter by asking,

“Do you not think I cannot call on My Father, and He will at once put at My disposal more than twelve legions of angels?”

“In Scripture the visitation of an angel is always alarming; it has to begin by saying ‘Fear not.’ The Victorian angel looks as if it were saying, “There, there.”

What angels are not:

Do we have “Guardian Angels?”

Some believe that Jesus’ words in Matthew 18:10 suggest we each have our own guardian angel. 4th Century Bishop, St. Basil the Great said,

“Beside each believer stands an angel as protector and shepherd leading him to life.”

“Whether or not each believer has a single angel assigned to him for his defense, I dare not positively affirm.”

Some say yes. Most scholars agree that Scripture is inconclusive on the topic. Personally, it would not surprise me if we do. 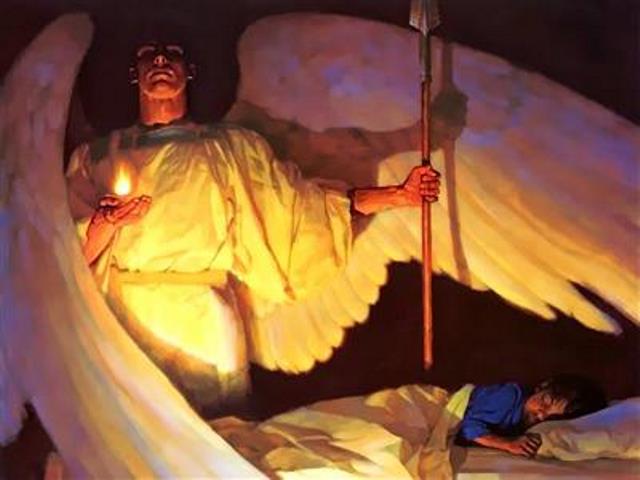 Do people have “angelic encounters” today?

“Be ready with a meal or a bed when it’s needed. Why, some have extended hospitality to angels without ever knowing it!”

2. In 1914, Ernest Shackleton, along with 27 brave men, embarked on a daring exploration of the Antarctic. After their ship became trapped by the ice, Shackleton and two of his men traveled, by foot, across the treacherous, icy terrain of South Georgia Island, vulnerable to sudden blizzards and hurricane winds. The island’s inhabitants considered the journey impossible. Nevertheless, Shackleton and his two partners crossed in 36 hours. Shackleton’s diary provides an interesting perspective on the South Georgia Island crossing:

I know that during that long and racking march of 36 hours over the unnamed mountains of South Georgia, it seemed to me often that there were four, not three. I said nothing to my companions, but afterwards Worsley said to me, “Boss, I had a curious feeling that there was another person with us.”

3. I, myself, believe with all of my heart I had an encounter with an angel in December of 1983. I was about 20 years old, living in Abilene, TX, and attending HSU.  One very late night, when my father was extremely drunk and full of rage, I found myself in a most dangerous situation.  It was during this moment that I had an experience I, to this day, cannot explain.  It involved a “stranger” who appeared, cared for and protected me, then disappeared.  I’ll never forget it. Ever.

If you missed Part 1 of this series you can access it here.

One thought on “Angels Among Us – Part 2”